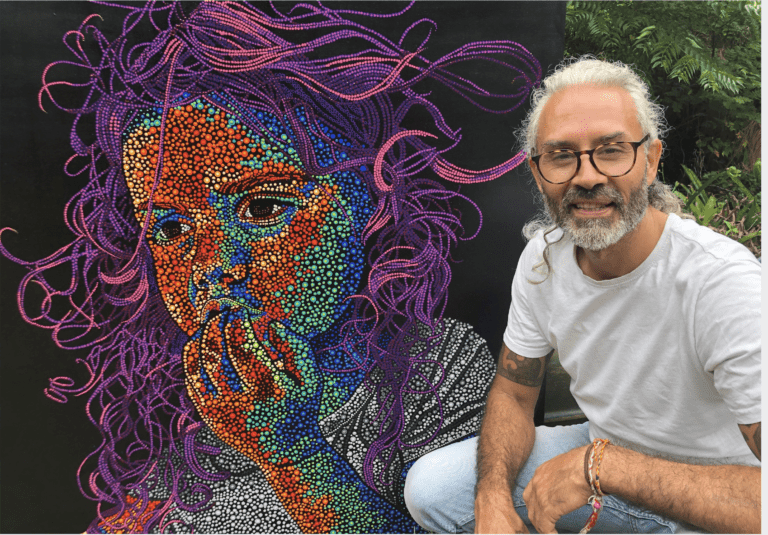 Jandamarra Cadd is an Australian born award winning Artist, and a descendant of the indigenous Yorta Yorta (Northeastern Victoria) and Dja Dja Warung (Central Victoria) nations. In this interview we discuss his difficult early years of abuse, bullying and incarceration, his journey as an award winning artist and his deep connection to country and culture.

The 70’s were a tough time to grow up in Australia as a mixed race person, and Jandamarra endured terrible bullying as well as both sexual and physical abuse.  At the young age of 13 Jandamarra left home spending a tough period on the streets in Brisbane in and out of the Juvenile Justice system.

He admits developing his strong form of endurance from these tough early years on the streets and incarcerated under terrible abusive circumstances. This endurance kept him seeking healing, peace and fulfilment.

Jandamarra then spent time in Melbourne working in family services before returning to the Sunshine Coast which is a place which held a few fond memories of his childhood.

Jandamarra had found a way to express his cultural ties, strong emotions and past trauma and pain when he picked up a paintbrush while in juvenile detention. This was to become his saving grace. Jandamarra shares this powerful story in my interview on podcast or youtube video featured below.

Later Jandamarra studied art and worked as an art therapist before moving to the Sunshine Coast to focus on his own work as an aspiring artist. He he has matured into an amazing artist and deep and philosophic man. scroll for more 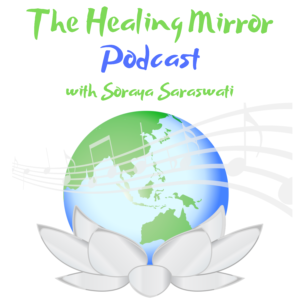 The Healing Mirror Podcast with Soraya Saraswati offers insightful interviews including the non-dual philosophy of love, and Interviews with philosophers, philanthropists and inspired humans.

Shining Through: From Grief to Gratitude

Now as a loving father of 2 delightful girls Mindari and Nunyara, and an accomplished and unique Artist, Jandamarra lives peacefully with his family on the land in the Sunshine Coast region.

I personally admire how Jandamarra has brilliantly and lovingly bridged the worlds of both Australian indigenous and non-indigenous people’s culture in his art…. not one of more value than the other but in a true harmonic relationship of equality. With his unique brilliance for the use of colour and hyperrealism in his stories and portrait painting combined with traditional aboriginal dot painting his work is bright, deep and emotive.

A Life to Be Honoured

Jandalmarra has risen from an early life of terrible abuse and hardship to become a unique artist who combines Australian cultural differences in his art as a form of expression and healing.

And with National Reconciliation Week #NRW2020 coming up here in Australia the Universe has divinely organised perfect timing for me to be sharing this live podcast/interview and blog. Due to Social Distancing still in place most of the celebrations of NRW will be online.

To launch NRW 2020 we are asking everyone to take to social media to acknowledge Country. We can’t be physically together to show respect but we can show respect to Country where we are.

On the first day of NRW,  27th May pleas take the time to acknowledge the Traditional Owners of the Land that you/we are on, wherever you/we are.

Please enjoy both the podcast and video interview with many of Jandamarra’s painting displayed below.

Find Jandamarra’s art and more information on his website: www.jandamarrasart.com/