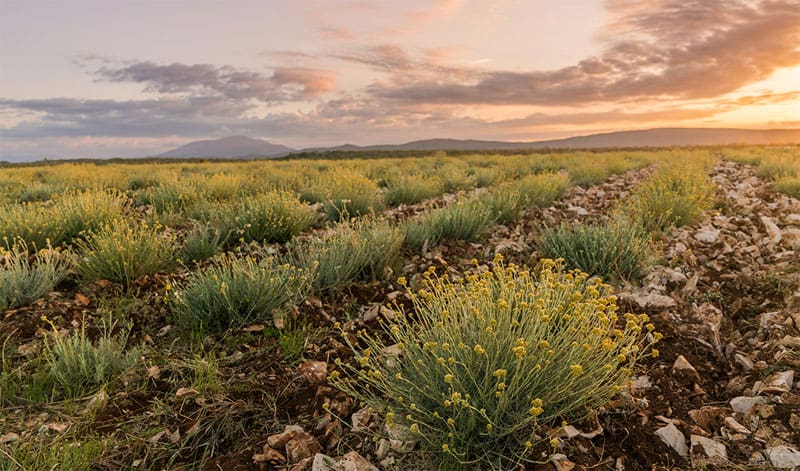 I recently traveled to Croatia to see Young Living’s Helichrysum Farm with my husband Terry. Helichrysum is a special and very expensive oil from such a  little herb that grows wild among the rocks. I wanted to discover the story behind this bottle of oil we enjoy so much from the Young Living Essential Oils range. Quite the adventure unfolded in this beautiful country that lies along the Dalmatian Coastline, called such due to the Islands dotted all along the coastline. I am ever grateful for how being a YL distributer has opened up my life to discover far flung places holding nature’s hidden secrets.

We arrived in Split, Croatia late and tired after a few days in London…our prime intention to visit the Young Living Helichrysum Farm. We got off to a rocky start with Terry’s phone (and all our flight info) slipping out of his pocket in the Uber car…angels to the rescue…got it back…and we relaxed gratefully in our lovely clean hotel room. I had no idea what to expect as I had been given no information.

The joys of traveling

In the morning we had a nightmare trip back to the airport to pick up a hire car. It poured rain as we joined others squashed under a tin shed waiting for our car. Got the car and hit the highway into a major hail storm. It was so bad we pulled over near a tree for shelter fearing the car would be badly damaged. I noticed a small bird sheltering just in front of us, for him the hail would be lethal. Then voila! the sun came out again, the bird flew off as did we.

We had a lovely afternoon in Split wandering along the ancient cream stone streets  down to the Port. It feels very much like Greece here, warm and rocky, with stone houses, many whitewashed and stone paved streets mostly too narrow for cars. It is clean and beautiful but full of hundreds of tourists from the big cruise ships.

Leaving Split we headed for Sibenik, managing to get rather lost. After kind help (everyone is so friendly and helpful here) we finally ended up in beautiful Sibenik, a smaller beautiful town by the Adriatic Sea…No parking…no contact for our apartment…more angels to help us…finally sorted…and we found our lovely quiet apartment. The yin and yang of life…while staying present…moment by moment with no expectations…so open to the daily adventures…laughing at the great cosmic joke on all of us…

In the morning we walked along the port, too early for breakfast as people rise later here. We headed out to meet Martin at the tollway, then followed him out to the Young Living share farm. He had previously told me it had no address so we were in his hands. The land is stunning with a backdrop of rocky mountains.

The land is fertile with many vineyards, olive trees and herbs of rosemary and lavender abound. I also saw pomegranate fruiting along the bay. Martin is very happy to be working as Young Living’s event manager here taking care of visitors and events. He had been working in a big hotel as an events co-ordinator when Young Living had hired rooms for a convention in 2015. After the event he had been promised a job when they got a farm up and running in Croatia. A dream for him he explains.

He loves working for Young Living Essential Oils and is clearly proud of the work Gary Young has undertaken here in Croatia, providing work for many local people. Martin proudly shared with us about helichrysum and the share farm.

As we drove into the farm local  women were feeding wild crafted Juniper branches into the chopping machine in preparation for distilling. This will be distilled for testing Martin explained to us, to check if the quality is good enough.

We drove further down into the helichrysum area and walked around with Martin. He explained that they have recently harvested the helichrysum, which was done by about 50 or 60 people by hand with big scissors. Gary is working on a machine to harvest but for now this is a big opportunity for the local workers. Martin explained that Gary wants to employ local people on the farm.

Martin explains that this is now the biggest helichrysum farm in the world with one million 200 thousand seedlings  planted. We were gob smacked by this figure. The farm owner and manager of the farm is Dominic who has 53 hectares of helichrysum planted. I asked how long has the farm been going and Martin explained that Dominic had 5 hectares of helichrysum planted already and was a small farmer, but since he met Gary Young he now has 53 hectares planted. Martin says, “Dominic was very scared if he could answer to Gary’s demands but now he is very happy because he is working with the best expert of aromatic herbs in the world. Everybody who knows Gary, who know Young Living, they  know that Gary  is several steps up from others that do essential oils in the world.”

He went on to say that this is a very big opportunity for us here who work on the farm. We then had a look at the house Dominic is building to be a display of the oils and for visitors. So why helichrysum? Martin explained, “It is a very special plant and very expensive. Only 5% oil comes from the flowers, most is in the stalk and leaves. The plant grows about 50 cm high but is very short now because it has been harvested.

Helichrysum’s only enemy is butterflies

It grows on the sunny and rocky areas and the best kind grows exactly in this place. Gary tried all over Europe but here is the best place. Here in this place where the rocks release calcium carbonate that feeds the plant. It is a very resistant plant that takes extreme conditions, two or three rains during the year is enough to water the plant. The only one enemy of this little plant is the butterflies,” Martin explains, “as the caterpillars will eat the lot. But in this place there is a lot of wind and this blows the caterpillars away. All this is why it is the perfect place. He showed how in the newly planted area since Gary has been involved the rocks are smaller because Gary bought a rock crusher and this makes it easer to farm.”

Martin went on to explain that the whole process is controlled by Gary’s patented ‘seed to seal’ process. The seeds are harvested from the nature and there are no pesticides, no chemicals. After 3 years the plant reaches its full potential.

Martin shares that this plant is protected now in Croatia as it is highly valued but that his grandfather and grandmother used helichrysum as tea for there circulation, blood and for their skin problems.

Martin surprised us by sharing that he is himself a musician and plays in an orchestra himself. I am a fellow musician he was happy about this. We tried to explain our music and Martin decided it was ‘spiritual ambianto’ and “oh I like it” he shared.

We followed Martin out from the farm, and at his suggestion visited the biggest National Park in Croatia which was just a few kilometres away. From here we were stunned to come across the amazing landscape around a wild river with many falls and lakes with forest and rocky outcrops. It was quite stunning and teeming with tourists who came from all over Croatia and abroad to see the park. The swimming area was something else. We enjoyed lunch by the water and a walk around the park and headed back to Sibenik.

That night we watched the sunset from the Fort high above this beautiful small city and a delicious meal in the stone city…did I mention the food here is fantastic. Croatia I have decided is one of the most beautiful places I have visited and the people are wonderfully honest and friendly and the food delicious.

Helichrysum is a very special oil also known in herbal books as Everlasting or Immortelle, impresses with its extreme gentleness and high efficacy for skin health and blood cleansing. Some documented properties of this herb are: Antispasmodic, Anti-inflammatory, Nervine and Natural analgesic.